Therapeutic Phytochemicals for Prevention of Birth Defects in Diabetic Pregnancies

Diabetes mellitus in early pregnancy is the most severe maternal disease that can cause congenital birth defects in newborn infants, a complication known as diabetic embryopathy. Even in the developed countries where aggressive glycemic control and perinatal care are available, the birth defect rate in diabetic pregnancies is still three times higher than the background rate. With the rapid increases in the number of diabetic women in childbearing age, the birth defect rate is projected to elevate dramatically in the near future. Thus, prevention of embryonic malformations becomes an urgent task. Basic research using animal models has uncovered the involvement of major cellular activities, including proliferation and apoptosis, and associated intracellular metabolic conditions, including nitrosative, oxidative, and endoplasmic reticulum stresses in diabetic embryopathy. Basic research has also demonstrated the effectiveness of treatments via targeting the intracellular stress conditions to reduce embryonic malformations. However, translation of the basic findings into human application requires high standards of safety to the embryos and mothers. Recent identification and clinical investigation of bioactive substances from plants have advanced the exploration for safe and effective naturally occurring phytochemicals, including flavonoids, stilbenoids, and curcuminoids, as candidate agents to prevent birth defects in diabetic pregnancies.

Diabetes mellitus in early pregnancy is one of the maternal diseases that cause birth defects in infants, a diabetic complication known as diabetic embryopathy [1,2]. About 10% of newborn babies to diabetic mothers have at least one structural defect, much higher than the background birth defect rate (3%) [3,4]. With a rapid growth of diabetic population, the number of newborn babies having structural anomalies is projected to increase [5]. Therefore, it is urgent to develop therapeutic interventions to prevent birth defects in diabetic pregnancies.

Developmental malformations in the embryo of diabetic pregnancy

Clinical data show that structural defects in infants of diabetic mothers are seen in many organs, and most common in the central nervous and cardiovascular systems (CNS and CVS) [2,6,7]. In the CNS, anencephaly, excencephaly, and microcephaly in the brain and spinal bifida in the spinal cord are frequently seen in infants [2,7]. In the CVS, hypoplastic ventricles, ventricular septal defects, conotruncal anomalies, double outlet ventricles, and tetralogy of Fallot are common in human cases [8,9].

In order to investigate the mechanisms underlying the hyperglycemia-induced fetal abnormalities, animal models of diabetic pregnancy have been generated and used [7,10]. In the commonly used diabetic mouse and rat models, embryonic and fetal structural defects in the CNS and CVS have been observed, similar to those in human infants (Figures 1 and 2) [1,2]. 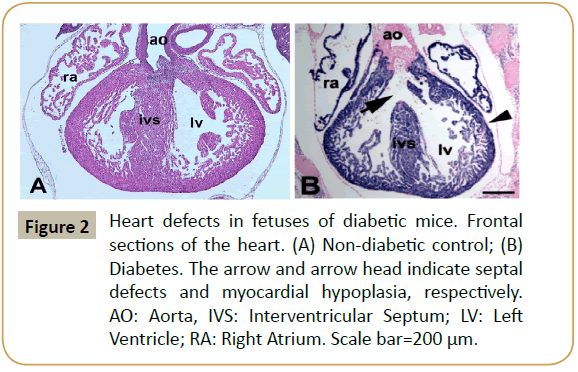 Glucose as a teratogen in diabetic pregnancy

It has been shown that high glucose is the teratogenic factor, whereas other factors associated with diabetes, such as ketone bodies, advanced glycation end products, and branched chain amino acids, may synergistically affect the action of glucose [11- 13]. Although maintenance of euglycemia in diabetic women before or during the first trimester can reduce the prevalence of fetal abnormalities, to prevent birth defects is still a tough task [14,15]. The reasons for this include that (1) euglycemia is difficult to achieve and maintain even with excellent compliance and clinical care; (2) short episodes of hyperglycemia during critical stages of embryogenesis can cause irreversible damages to the embryo; (3) many women do not know that they are diabetic before conception; and (4) many diabetic women do not plan pregnancies and do not seek prenatal care [16-18]. Therefore, therapeutic interventions are needed to protect embryos from hyperglycemic insult.

Dysfunction of the rough endoplasmic reticulum (ER) causes defects in protein folding. Unfolded and misfolded proteins cannot be processed, packaged, and transported out of the ER, resulting in excessive accumulation of unfolded or misfolded polypeptides in its lumen, generating ER stress [25,26]. First, the UPR increases the expression of chaperone proteins to resolve the protein folding crisis [27,28]. Second, the UPR attenuates protein translation and eliminates the abnormally folded proteins via degradation. Third, if the crisis persists, the UPR arrests mitosis, and/or trigger apoptosis to eliminate the cells [27,29].

Maternal hyperglycemia also alters morphogenesis and function of mitochondria and elevates levels of reactive oxygen species (ROS) in the embryo [30,31]. In addition, it diminishes endogenous antioxidative buffering, including depletion of antioxidants, such as glutathione, and reduction of the expression and activity of antioxidative enzymes, including superoxide dismutases (SODs) and glutathione peroxidases (GPXes), resulting in oxidative stress [32,33].

The hyperglycemia-induced intracellular stress conditions have been targets for interventional studies to reduce embryonic malformations in diabetic animal models [1,7]. During the past decades, efforts have been focused on oxidative stress [1,33]. Folate (vitamin B12), a single carbon donor, is involved in DNA synthesis, DNA methylation, and redox regulation [34,35]. Supplementation of folic acid has long been used in perinatal care to reduce fetal abnormalities and other adverse pregnancy outcomes [34,35]. With respect to diabetic embryopathy, addition of folic acid can reduce NTDs in animal embryos cultured in high glucose [36]. Treatment with folic acid in diabetic pregnant animals has also shown to decrease embryonic malformations [36-38]. However, in humans, nearly 30% of pregnancies complicated with diabetes are resistant to folic acid treatment [39]. The underlying mechanisms are still unknown.

A large number of antioxidants, including vitamin C, vitamin E, lipoic acid, ergothioneine, and N-acetylcysteine, have been tested in diabetic animals and all shown to reduce embryonic malformations [40-49]. Arachidonic acid and myo-inositol have been used to restore the deficiency caused by maternal hyperglycemia and to inhibit ROS-mediated lipid peroxidation [40,50,51]. However, the enthusiasm of using antioxidants to prevent birth defects is dampened by the failure of clinical trials to treat similar diseases, such as preeclampsia and cardiovascular diseases [52-54].

Strategies to target other stress conditions are warranted for exploration. Facilitating protein folding to alleviate ER stress is a candidate approach. A number of chemical chaperones, such as phenylbutyric acid (PBA) and tauroursodeoxycholic acid (TUDCA) have been shown to ameliorate diseases in animal models and humans, such as cystic fibrosis and diabetes [55-58]. PBA has been shown to reduce NTDs in mouse embryos in vitro and rescue endocardial cell migration in heart tissues cultured in high glucose [59,60]. More significantly, it has been demonstrated to reduce NTDs in embryos of diabetic mice in vivo [61].

Alleviation of nitrosative stress can be achieved by inhibiting NOS2 activity. Such approach has been demonstrated to be feasible. Oral treatment of diabetic pregnant mice with an NOS2 inhibitor, L-N6-(1-iminoethyl)-lysine, has shown to decrease embryonic malformation rate [62].

Because of the unique characteristics of diabetic embryopathy, interventions should be non-invasive, easy to obtain and use before conception, and safe to the embryo and mother. Thus, oral treatment and dietary supplementation are the practical routes of administration. However, the identification of safe and effective therapeutic agents becomes the major obstacle in birth defect prevention.

Attentions have been drawn to naturally occurring products, phytochemicals, in fruits, vegetables, and even traditional medicines [63]. The most common dietary phytochemicals include flavonoids, stilbenoids, and curcuminoids [64-67]. The common characteristic of these phytochemicals is that they possess phenyl rings in their backbone, thus, also known as polyphenols (Tables 1-3). Multiple hydroxyl groups are attached to the phenyl rings, providing active sites for reaction with other molecules [68,69]. These hydroxyl groups can be replaced with other groups, such as methyl and glycoside, to generate a large variety of derivatives (Tables 1-3). Different derivatives have different physical and chemical characteristics and therapeutic properties.

Resveratrol, a stilbenoid antioxidant, has been shown to reduce apoptosis in the embryos of diabetic animals and restore the levels of proteins that are involved in regulation of apoptosis and development, including retinoic acid receptors and protein kinases [70,71]. Curcumin, rich in turmeric, and punicalagin, found in pomegranate juice, can also reduce NTDs in mouse embryos cultured in high glucose [72,73].

Derivatives of flavonoid also possess antioxidative properties. Epigallocatechin-3-gallate (EGCG), abundant in green tea, has been shown to reduce NTDs in mouse embryos in vitro and in vivo [74,75]. In addition to antioxidative properties, some of polyphenols also inhibit NOS expression and activity and block ER stress-activated molecular pathways [76-78]. Among the flovonols, quercetin (QC) has been shown to reduce NTDs in the embryos of diabetic mice. Such effect is associated with alleviation of nitrosative stress, indicated by decreases in protein nitrosylation and nitration, and oxidative stress with reduced levels of lipoperoxation products [79]. QC upregulates genes that encode antioxidative enzymes to enhance endogenous antioxidative capacity for long-lasting protection against oxygen free radicals [79]. Moreover, QC also increases the expression of the genes involved in DNA damage repair [79]. These suggest that QC affects multiple molecular systems to enforce cellular defense against hyperglycemic insult.

However, QC is an aglycone form of flavonoid. It has lower solubility in water and lower rate of absorption in the gastrointestinal tract (GI) than its modified derivatives [80,81]. These characteristics may limit its applicability in clinical practice.

Quercetin-3-glycoside (Q3G), also known as isoquercetin, is a glucoside derivative of QC. It has higher water solubility and higher GI absorption rate [80,82,83]. Q3G is relatively stable in circulation and thus, has higher bioavailability in organ systems. Unlike other QC derivatives, Q3G can be transported via glucose carriers, which increases its bioavailibility to cells [84]. Treatment with Q3G in vivo reduces NTDs in the embryos of diabetic mice [85]. While alleviating intracellular stress conditions, Q3G modulates the signaling of the NFκB system, which is involved in regulating the expression of NOSes and SODs [85].

Human pregnancy presents unique challenges for intervention to prevent birth defects. The safety and effectiveness are the key factors in development of intervention strategies. Searching for safe and effective agents from phytochemicals is an approach of worth taking. Vagarous studies are required to delineate the pharmacodynamics and pharmacokinetics of candidate agents in both maternal and embryonic systems. Complete understanding of the cellular and molecular mechanisms underlying their actions in diabetic embryopathy is also essential for ensure the feasibility in application in human pregnancies.